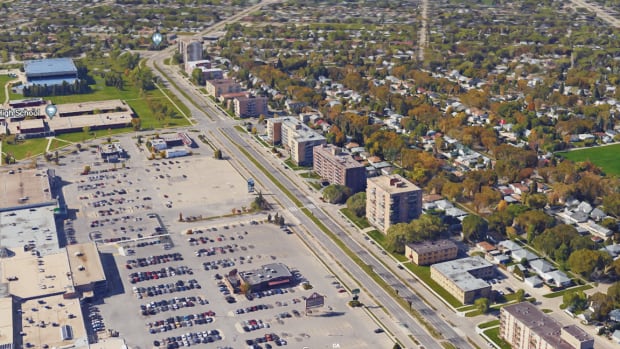 This stretch of Grant Avenue generates more mobile photo-radar tickets than any other location in Winnipeg, according to a CBC News analysis of almost 23,000 tickets handed out over four months in 2016. (Imagery 2017 Google, Landsat/Copernicus)

If you want to avoid a mobile photo-radar ticket, don’t go anywhere near Grant Avenue and Thurso Street.

You may also want to avoid driving during the afternoon rush hour anywhere in Winnipeg, particularly on Wednesdays.

A CBC News analysis of 22,737 mobile photo-radar tickets handed out over a four-month period in 2016 found the City of Winnipeg dinged more motorists for speeding on Grant at Thurso than at any other location in the city, more motorists on Wednesdays than on any other day of the week, and more drivers between 4 and 5 p.m. than during any other hour.

Geographically, Grant at Thurso — a stretch that runs alongside Grant Park Shopping Centre — is the easiest place to get a ticket. A total of 2,916 motorists were nailed by mobile photo-radar equipment for driving faster than 50 kilometres an hour at this River Heights intersection from Jan. 1 to May 1, 2016.

“That one fools a lot of people, my family included. I believe my own wife got a ticket there,” Winnipeg police Chief Danny Smyth said Thursday.

“It’s [near] a school, but Grant is one of those corridors that people tend to travel more like 60 along, so yeah, that one seems to catch a lot of people.”

River Heights-Fort Garry Coun. John Orlikow, whose ward includes the offending intersection, said the city needs to do something to mitigate the number of speeding tickets along this section of Grant Avenue.

Last June, he presented a motion that would require the city to flag the top two locations where violations occur each year. He said the goal is for Public Works and the police to propose measures to reduce speeding and increase safety, rather than leaving the locations unaddressed and allow it to continue generating tickets.

In 2003, the public works department recommended increasing the speed along this stretch from 50 to 60 kilometres an hour. A study found the natural speed for most motorists was between 61 to 68 along the route and found the collision rate to be in line with other regional streets.

“Furthermore, it is expected that making these changes to the speed limit at these locations will … provide motorists travelling along these routes with a more consistent driving environment in terms of uniformity in speed limits,” said the report’s author.

However, a motion rejecting the recommendation by then-councillor for River Heights-Fort Garry Garth Steek was carried, effectively freezing the speed at 50. 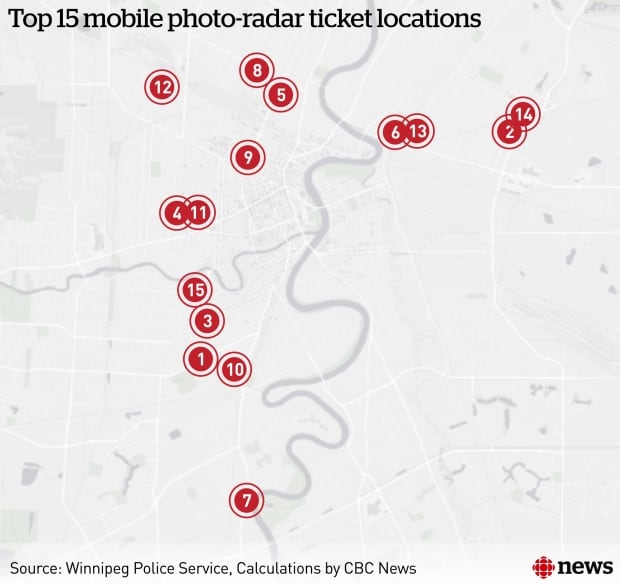 But the 50-an-hour speed zone at Grant and Thurso actually is an anomaly, when it comes to places where mobile photo radar nabs the most motorists.

The mobile photo radar data, obtained by CBC News after an 18-month freedom-of-information dispute, reveals most motorists are caught in 30 km/h zones.

Seven of the top 10 stretches of road where drivers were caught during the sample period had 30 km/h speed limits, while a total of 61 per cent of the tickets were generated in 30 km/h zones. 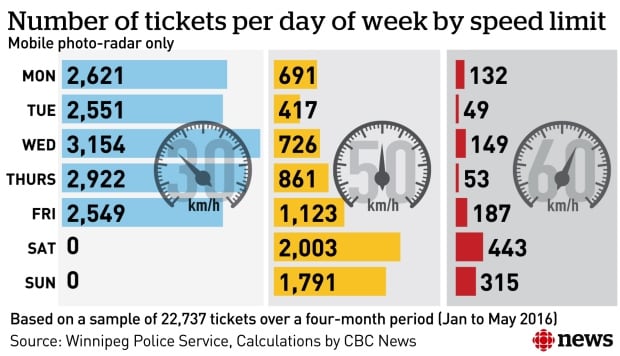 Police Chief Smyth said he’s not surprised. Provincial legislation gives police no choice but to direct their mobile photo radar contractors to set up their equipment around schools, playgrounds or construction zones, he said.

“There’s a cynicism behind this program, because we’re limited to these areas,” Smyth said. “People get upset about that, that it always seems to be those 30 kilometre zones at the schools.”

Smyth said the police would like to place mobile photo radar on regional streets where conventional photo enforcement operations would endanger officers.

“I certainly would like to have greater flexibility to be able to deploy in some of these high-speed corridors,” Smyth said.

It is not safe for police to stand out in streets with vehicles whizzing by at 80 kilometres an hour, he said, adding many good candidates for mobile photo radar — regional roads such as Chief Peguis Trail, Bishop Grandin Boulevard and the southern extension of Kenaston Boulevard — either didn’t exist when mobile photo radar arrived in Winnipeg or weren’t busy enough to warrant the enforcement measure.

Smyth said he’s spoken to Infrastructure Minister Ron Schuler about the possibility of expanding the locations where mobile photo radar can operate. 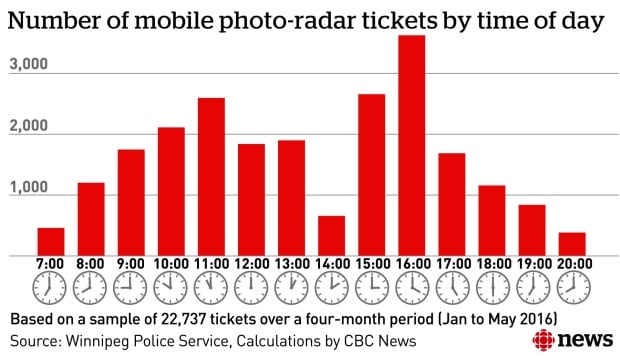 The lobby group Wise Up Winnipeg would like the province to tighten the reins on the program, rather than expand it.

​The large number of tickets handed out in 30 km/h zones is a perfect example, he said.

“It’s unnaturally slow and prudent drivers find themselves exceeding that unnatural speed limit, especially in the city of Winnipeg, because unlike other cities, we don’t even have the accompanying yellow flashing lights you find in other [cities’] school zones,” Dube said Thursday in a telephone interview.

“In Winnipeg, they’re as stealthy as possible, so it comes as no surprise why tickets are through the roof. And that’s never going to change,” he said. “It’s simply a stealthy program, and they know very well that’s the case.”

Under an agreement between the city and the province, the police are required to submit an annual report on the program’s activities. This includes a controlled study evaluating how photo enforcement modifies speeding behaviour and an analysis of the effect of photo enforcement on safety over time.

However, none of the annual reports submitted by the police contain this required information. 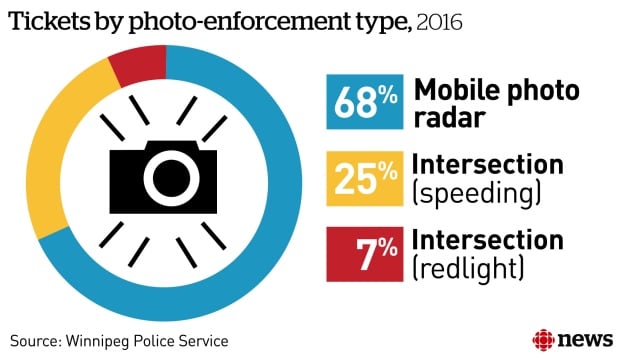 “It’s the responsibility of all drivers to know what the speed limit is and to obey the law. The best answer if you don’t want to pay for speeding tickets and to slow down,” he said.

Dube said politicians always trot out these sorts of lines.

“You know, ‘Slow down, save the kids, if you don’t want a ticket, just slow down. It’s empty rhetoric, but it’s an easy sell.”

How we got the data

In May 2016, CBC News filed a freedom-of-information request for four-months worth of mobile-enforcement data. A month later, the Winnipeg Police Service rejected the request on the basis the records belonged to a third party, mobile-enforcement contractor ACS Public Sector Solutions.

In July 2016, CBC News complained to the Manitoba ombudsman, arguing the deal between the police and ACS clearly indicated the city owns the records and can have access to them at any time.

With the help of the ombudsman, the police in December 2016 released a disc of information without any mobile-enforcement locations. The police claimed that information would jeopardize the safety of photo radar operators.

CBC News complained again and the police released a new disc in October 2017.

*Based on tickets issued between January and May 2016.