Over use of stop signs

IMAGE:  Taylor at Borebank, Winnipeg…   through traffic has to stop despite the lack of cross traffic

In addition, the MUTCD discusses a few situations where Stop signs should not be used.

The MUTCD also advises that less restrictive measures of traffic control be considered where a full stop is not required at all times.

MUTCD describe Yield signs along with applications and placement of these signs. This description includes locations and situations where Yield signs can be effectively installed.

Primary factors to be considered when judging the appropriateness of Yield sign usage include traffic volumes, volume split, speeds, visibility, and crash history. R1-2 Visibility and approach speed are important factors when selecting the most appropriate control for a given intersection.

The MUTCD advocates the use of Stop signs only when warranted. In many situations with lower volume roads and streets, Yield signs or no control may be the most appropriate choice.

Overuse of Stop signs will result in additional delay for drivers, disruption in traffic flow and/or traffic congstion, increased fuel consumption and consequent noise, dust and emissions pollution, and possible eventual noncompliance by motorists due to the frustration endured by precieved redundant stopping and starting.

Some studies have found that Stop sign installation will not effectively reduce, and will actually increase speeds and therefore, should not be used for this purpose.

Overuse of Stop signs will have a net effect of drivers beginning to disregard them and resultantly, other traffic rules.

If the complaint or concern is for drivers not stopping at stops, it is likely that the sign has been used improperly.

Alternate methods of controlling speeds, such as traffic calming, are also described in the MUTCD manual.

Many studies have been made of the effects of Stop versus Yield control at intersections.

The City of Winnipeg currently neglects to apply sound engineering principles to stop/yield signage use. 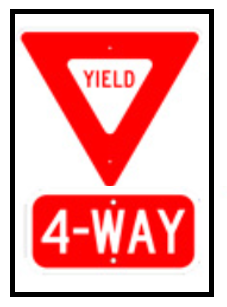 s are exclusively controlled by stop or 4 way stop, in many cases where yields may more appropriate and productive at traffic calming.One such reference is Guidelines for Converting Stop to Yield Control at Intersections, National Cooperative Highway Research Program (NCHRP) Report 320, published in October 1989.

Enforcement is then often utilised, instead of proper signage use (engineering).

If you want specific yields in your area where appropriate vs. stop signs contact 311.  For an overall policy change to follow proven national standards contact your Councillor and MLA as well as the MB Minister of Infrastructure, their official critic and the members of the Winnipeg City Council Committee for Infrastructure.  Share your responses with us.  Collectively we can make a difference.

While the City of Winnipeg echos much of the concepts as described above,

it neglects to consider yield and 4 way yields.

All-Way stop control is NOT a speed control device.

Many requests received for additional stop signs are related to concerns of speeding. Studies show that stop signs only influence motorists to slow down within approximately 30 metres before and after the stop sign and that speeds actually increase at mid-block locations to the original speeds and often higher as drivers attempt to make up for lost time.

Before and after studies show that Stop signs have little or no impact on vehicle volumes.

Stop sign compliance studies show that when all-way stop control was installed but not warranted, an average of 68% to 95% of the motorists approaching the intersection do not come to a complete stop. In general, if people see no reason for the stop sign, they disrespect the sign. Excessive unwarranted stop sign usage breeds disrespect for all traffic signs. Inappropriate signs become part of the landscape and their effectiveness is reduced.

All-way stop control does not always increase safety/reduce collisions at an intersection.

Disregard and disrespect of stop signs by the motorist may decrease safety. Pedestrians may be lured into a false sense of security by the presence of a stop sign by assuming that motorists will stop. Young children who are brought up to believe that people obey laws are the most vulnerable victims. Other motorists may also assume a motorist will stop because of the presence of the sign and enter the intersection when it is not safe to do so, thus resulting in the potential for a collision.

All-way stop control may reduce the number of right-angle and left with opposing through collisions. However, there is a potential increase in the number of rear-end and fixed object collisions, especially if there is a high volume of traffic being required to stop unnecessarily.

Proper use of All-Way Stop Control:

The purpose of all-way stop control (3-way or 4-way) is to assign right-of-way to traffic approaching an intersection. Stop signs should only be used where an engineering analysis indicates the usage of stop signs is warranted. The following aspects are considered:

We advocate for the appropriate utilisation of

removing where not compliant

or conversion to yield or 4 way yields.

It is ironic that there has been a move to introducing traffic circles and roundabouts to Winnipeg, which are, functionally similar and similarly effective at traffic calming as 4 way yields, but much more expensive to install.