David Grant's professional credentials are at stake, not to mention thousands in fines 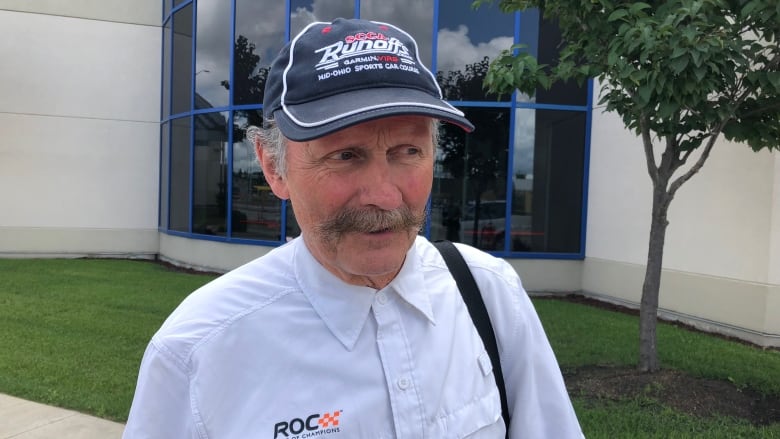 David Grant talks with reporters on Thursday following his first disciplinary hearing in Winnipeg. The retired engineer refuses to pull back from his belief that Winnipeg's amber light times are too short at high-speed intersections. (Laura Glowacki/CBC)

A retired engineer facing thousands of dollars in fines and the removal of his professional credentials isn't letting that quiet his call for longer amber lights in Winnipeg.

David Grant, a retired materials and chemical engineer, is charged with professional misconduct by the Association of Professional Engineers and Geoscientists of Manitoba (APEGM). He attended his first disciplinary hearing on Thursday.

"They allege that I am not qualified to comment on traffic. I've been facing yellow lights for 55 years or so. I know how they work," Grant said after his hearing was adjourned.

The regulatory body's charges against him stem from comments Grant made to two newspapers in 2016 and 2017 — Metro Winnipeg and the Winnipeg Free Press.

His comments to the newspapers supported a court case launched by James Aisaican-Chase who also advocated for longer amber light times. Aisaican-Chase, 72, succumbed to cancer earlier this year after losing a court battle to overturn a 2015 red light ticket.

Wise Up Winnipeg, an advocacy group concerned with traffic issues, has filed an appeal in that case

A retired engineer facing thousands of dollars in fines and the removal of his professional credentials isn't letting that quiet his call for longer amber lights in Winnipeg. 2:28

The investigation committee said that by providing statements to the newspapers about amber lights, Grant divulged private information about an investigation, made false statements, brought his profession into ill repute and expressed opinions without the qualifications to do so, among other charges.

Apart from his career doing engineering work for Manitoba Hydro, Grant says he worked at Formula 1 and Indy races as a safety official.

"This could be a $30,000 penalty for me for really doing approximately nothing wrong. I'm an engineer. I follow the rules," Grant said.

People should be shocked at the extent and the effort that is being put into preventing a retired engineer from using basic math skills.

He contends Winnipeg's four-second amber lights do not give drivers sufficient time to stop safely at intersections where speeds reach up to 80 or 90 km/h. Grant is calling on the city to extend amber light lengths to up to six seconds, as other cities have done, or install warning flashes, such as those along the Perimeter Highway.

The APEGM, also known as Engineers Geoscientists Manitoba, would not comment on Grant's hearing or the charges brought against him.

"It's not my place to make any comment on this particular hearing or any hearing," said Grant Koropatnick, CEO and registrar for Engineers Geoscientists Manitoba.

"The goal of this process is to ensure that all the facts come out and that the member gets a fair trial."

Todd Dube, founder of Wise Up Winnipeg and an outspoken critic of photo radar enforcement as well as parking regulations, called Thursday's hearing an exercise in bureaucracy.

"People should be shocked at the extent and the effort that is being put into preventing a retired engineer from using basic math skills," Dube said.

He believes the association took a position on amber lights that found four seconds sufficient time to stop and is now refusing to back down from that position.

While Winnipeg could lose millions in traffic fines if drivers were given more warning about an impending red light, Dube believes the hit to city revenues would be worth it.

"If we corrected the engineering in this city including the amber timing … we could make this city much safer without any expense at all."

Grant's next hearing with Engineers Geoscientists Manitoba has yet to be scheduled.

Koropatnick says disciplinary procedures of this kind can take years before they are finally resolved.