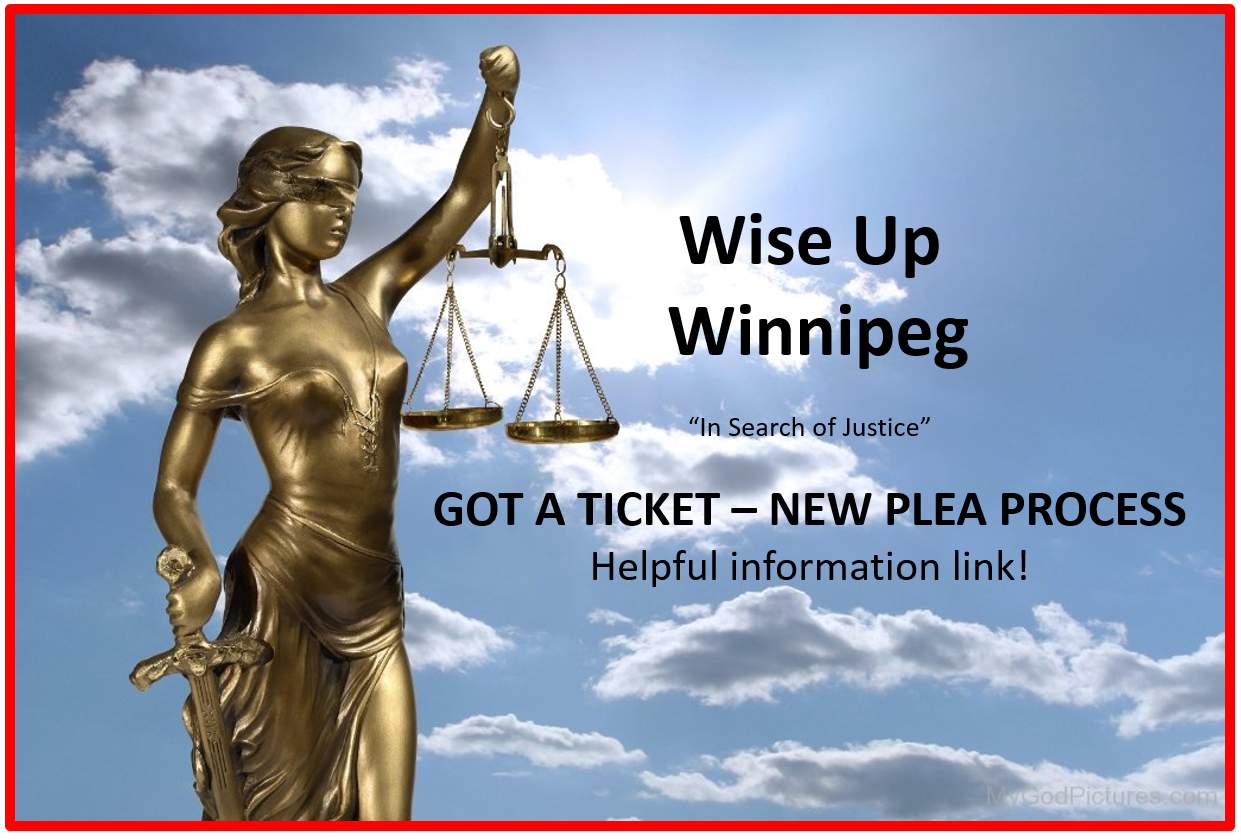 There have been some changes to Traffic and Bylaw alleged Offence Notices (formerly Summary Conviction Notices) and Court process after the MB Majority Government replaced the Summary Convictions Act with the Provincial Offences Act and the MB Bylaw Enforcement Act which were rushed in with little to no review, debate or public consultation late last year.

MLA’s were delayed from debate on lengthly legislation till the early morning hours due to a “technical difficulty” with recording systems. There was plenty of time to debate earlier as much of this already put forward as amendments to the Summary Convictions Act by the previous NDP majority Parliament. The changes follow the NDP, PC and CoW Parking alleged offence changes detailed below.

These changes like previous (Crown Calling and 4A Programs and parking) appear to be an attempt to get more people to just pay, to try to reduce court delays and mitigate the problems from 11b Charter challenges for timely trial instead of dealing with the root issues.

The accused can still call, email or reply by post to the Provincial Offences Court with plea but they have not informed the accused of this on the notice and taken other steps to make it more difficult to contest. More info below.

However, the phone number and option to respond by mail has been taken off of tickets.

A new option to plead guilty with explanation and ask for reduced fine has been added on top of the previous changes to make fines up to six times higher than elsewhere in Canada.

Additionally, the portion of the offence notice where an option for the fine to be payable via community service no longer appears. Unfortunately, this appears to be the strongest detriment to lower income individuals/families.

For alleged offences issued before or after these legislation changes (Nov 20th 2017) Police Officers, 3rd party for profit contracted operators and parking agents plus bylaw officers are no longer required to attend trial to be questioned as long as the new evidence certificate (sworn statement) is completed fully and adequately. If it is not provided or statement vague they need to attend. The discovery package need to be sent to accused well in advance (min 7 days and recommended 30 days) or request adjournment. If given last minute at Court then request the matter dismissed due to time off work to attend etc… The accused can ask the Crown to call them as their witness so they can be questioned and if needed they can still subpoenaed. More info below and here

There is an obvious upward trending of tickets being issued. Up to 150,000 alleged simple traffic offences issued per year in Winnipeg by for profit multinational ACS / Lockhead Martin / Xerox / Conduent since 2003, up to 55,000 by WPS Police Officers and up to 100k alleged parking offences per year in Winnipeg issued by for profit multinational G4S Tech parking agents (G4S is a CoW / Winnipeg Parking Authority (WPA) partner).

Contesting of Parking alleged offences moved from Summary Convictions Court (now Provincial Offences Court) in 2016 to WPA office and if you disagree with the WPA staff member you see a Provincial appointed Adjudicator in the Window beside them. If you don’t agree with this decision you have to pay a fee to have the matter appear before a Judicial Review with proper Provincial Justice. Now the Province and CoW have allowed over 700 alleged Bylaws offences to be handled via this new WPA process via the MB Bylaw Enforcement Act and new City Bylaw changes.

This new process already proven to be biased and error prone for parking offences unless taking it to Judicial Review which is already under way for a Know Your Zone alleged offence. The City already admitted these were unlawful after Court action by WUW and FIPPA requests. The City Lawyer stayed to avoid a decision and even the Court of QB Justice called it “ducking out”. They stopped enforcing but refused to refund those paid in good faith. Now they have started enforcing again even when the required signage as per the HTA not present and also when no recent snow fall present.

This ducking out and other unfair or unjust behaviour is similar to what the Province and City did with Millions worth of Construction Zone and Designated Construction Zone alleged offences that were proven to be unlawful after WUW Court and related direct actions. Now they appear to be trying to do the same with red light camera alleged offences that WUW is challenging in Court for being artificially lower and dangerously short to maximise violations at the expense of more accidents, injuries, claims, deductables, license and insurance penalties and suspensions as well as undue suffering etc…

It seems peculiar that the City/Province have chosen to modify legislation, bylaws and the ticketing process, as opposed to the reevaluation of the root causes, re-engineering roads/signage/amber time/speed limit setting and related processes, legislation and bylaws to require following national engineering standards that proven to improve public safety and safe efficient traffic flow.

Wise Up Winnipeg advocates for:

ENGINEERING – EDUCATION – ENFORCEMENT
1. Implementation of prudent traffic engineering standards
2. Public education
3. Finally, Enforcement
.
If you send in form by post or email it MUST BE RECEIVED by the court before the final due date.
To plead “not guilty”, you have multiple options:

Registered mail is the recommended option. Email is not secure for confidential information.

A trial date will be set for you to go to court at a later date. You must appear at the trial to plead your case or have an authorized agent represent you. If you do not show up, a warrant may be issued for your arrest or the trial may go on without you there.

In the case of a photo enforcement ticket (photo radar):

A “not guilty” plea must be made by the registered owner whose name is on the ticket.

Even if the owner wasn’t driving the vehicle at the time of the offence, the owner is responsible for dealing with the ticket.

Where will my trial take place?

Trial dates are scheduled in the court centre that is closest to where the offence happened. For example, if you received a ticket in Thompson, the trial would take place in Thompson (even if you live in Winnipeg).

What happens if I miss my trial date?

If you miss your scheduled trial date a warrant could be issued for your arrest or the trial could go on without you being there. This is called an “ex parte” hearing. If you are found “guilty”, you will receive an “ex parte” notice in the mail telling you the outcome of the trial.

If I don’t agree with the court’s decision, can I appeal my conviction?

Yes. If you disagree with the decision after pleading “guilty” to a ticket, or after your trial, you may file a formal appeal in the Court of Queen’s Bench within 30 days of the court decision.

If you go to trial and are convicted but feel the conviction was wrongful (the JJP was biased or errored in law, ignored the rights of the self represented etc…) you can appeal as stated above. There is a filing fee of $35. You will also need to get a transcript of the trial. There is also a fee for the transcript if it has not been ordered already by someone else.

It is suggested to NOT use the option to only send correspondence by email as you may forfeit the right to be given notice by registered mail if it becomes a default conviction. This may result in a license and/or insurance suspension without notice.

Historically, the officer or operator would have to attend the hearing to answer questions. This is no longer automatic as mention above. The accused or their authorised representative must ask the Crown to call them as their witness so they can be questioned and if needed they can still subpoena the officer, operators or parking agent. This is accomplished by requesting it of the Crown. If the Crown does not agree you can appear before a Justice to request it.
.
It is understood that the Justice cannot deny or it is a charter violation. This would then be a separate motion filed in Provincial court and there is no fee to do this for Criminal or HTA alleged offences. It appears that this is unlikely, if nothing but for the bad press it would bring.
.
This change (to only require sworn statements) only for alleged offences that were issued after the recent legislation changes rushed through late last year a per above. If from before this they still required to attend. You can advice the Crown of your intention and if you are self represented they should give you some direction as per the MB Court Directives. I assume they would like 30 days notice but the sooner you request the better. If you are only finding out now they should try and make an exception based on the above directives.
.
These legislation, bylaws and policies are arguably allowing charter violations already with the accused not advised of this rights and they taking extraordinary efforts to make it harder for the accused to know their rights and contest.
.
If the vast majority of these alleged traffic and parking alleged offences were not unfair or unlawful due to aggressive targeting of the average safe and respectful driver or vehicle owner in known and often dangerous or confusing engineering deficient locations this would not be an issue as it does reduce costs to tax payers.
.

IMPORTANT: This post is intended to be informational only and should not be construed as legal advice. While many people undertake this process independently, it is always best to seek advice from proper professionals.

The form linked above obtained by emailing: poc@gov.mb.ca
.
To learn more about this and the legislation that was rushed and enacted without due diligence, much debate or public consultation and would likely fail constitutional challenge see comments and discuss this news on the WiseUpWinnipeg Facebook Group post:

If you want to help get the root issues addressed that are affecting public safety, confidence, trust and respect and stop the erosion of civil and other legal rights in Manitoba please consider donating to WUW Court actions with legal counsel that is on behalf of and to the benefit of all Manitobans.