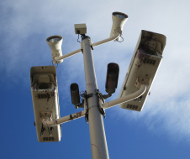 Increasing the duration of the yellow timing at intersections in Chicago, Illinois by one second would have the greatest impact on reducing red light running. That was the finding of a team of Northwestern University researchers who took advantage of the data gathered by 152 red light cameras over the course of six years to gain insight into the factors that play a significant role in red light running.

A total of 10,944 observations were recorded by the Windy City’s cameras, operated by Redflex Traffic Systems of Australia. Statistical analysis confirmed that increasing the yellow time from 3 seconds to 4 seconds had more of a positive impact than any other variable in the study when it came to reducing red light running. Other factors proved to have far less impact, such as having a higher speed limit or a wider intersection.

“Longer yellow phase duration increases the probability of drivers passing through an intersection before the signal turns red, avoiding a violation,” the study noted.

The study then examined the impact of adjusting each variable on related behaviours, such as turning right on red, or running the red light by a mere fraction of a second. These are the infractions that make up the bulk of the Chicago program’s annual revenue. In every test, the longer yellows came out on top in terms of effectiveness. The findings on the longer yellow timing are consistent with past independent research .

“This practice has shown promising results according to a number of studies,” the study explained. “Bonneson and Zimmerman found that an additional 0.5 to 1.5 seconds of the amber indication interval (as long as the total time did not exceed 5.5 seconds) decreased red light camera violations by up to 50 percent.”

A copy of the report is available in a 350k PDF file at the source link below.