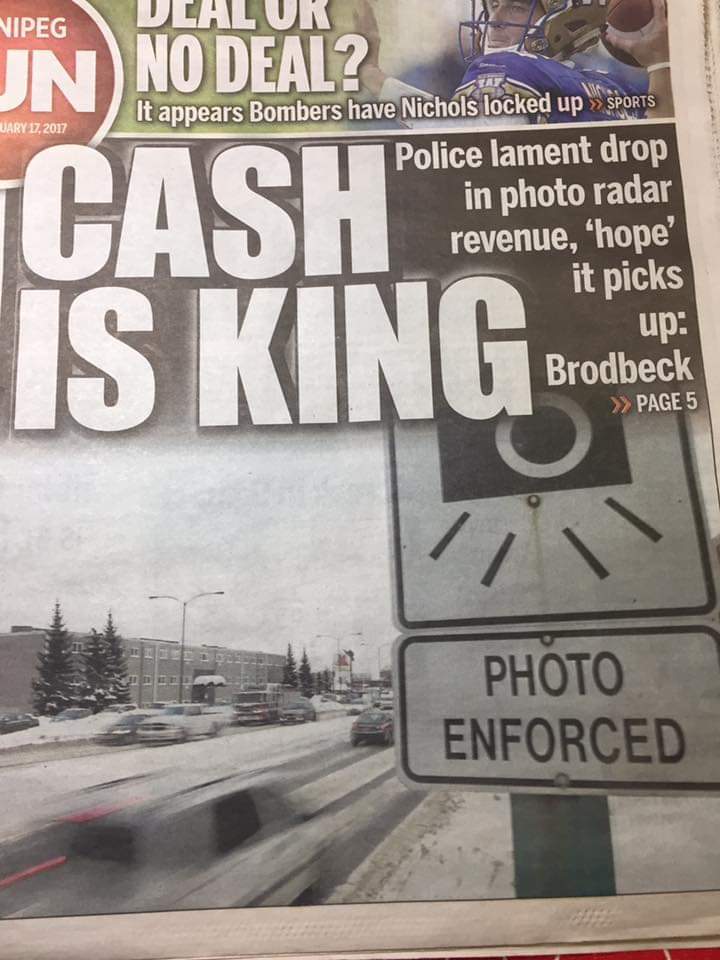 There has been many good articles by Tom Brodbeck about Photo Enforcement in Winnipeg. The Bowman led City and Pallister led Province have only allowed the many serious issues around it to get worse.

Why does WPS, the City, Province and MPI include or depend on fine or demerit related revenue from photo or officer traffic “safety” enforcement in their budgets?

Why are the conditions of authority for photo and officer traffic enforcement, court directives, charter and other legal rights not enforced or ignored?

It has been suggested to elected and appointed officials repeatedly that this “revenue” should not be included in budgets and doing so plus the lack of enforcement of above conditions and rights has led to:

1) Ignoring of MUTCD, ITE and other proven national traffic engineering safety standards for speed limit setting, intersection amber times, speed limit, reduction and photo enforcement and related signage. Removal of hundreds of the above public paid and engineering recommended signage with no valid reason. Just excuse that too much signage is confusing.

2) Aggressive and predatory enforcement by photo and officers of zones with known and dangerous engineering deficiencies with low safety risks.

3) Diverting officers from community support and other important units to work pensionable OT on traffic duty and targeting almost exclusivly deficient locations as mentioned above.

4) Less availability or focus by officers, Crown, the Courts and other limited and valuable resources than is needed on preventing, investigating, solving and prosecuting serious crime (violent, property, blue collar, corporate and financial).

5) Up to 150,000 photo and 55,000 officer issues alleged traffic offenses per year in Winnipeg with upward trend and up to 25% contesting rate by accused vehicle owners or drivers. This volume, contesting rate with fines up to 6 times higer than elsewhere in Canada are many times higher than the Canadian average per capita.

6) Calls to police for B & E and other serious crimes taking up to 36 hours to get response or 911 callers getting told there is no officers available yet multiple peaceful protests by WiseUpWinnipeg members in Construction or School zones with unlawful setup and inadequate signage get response by WPS in under 15 mins. Other cases with no response while the TrapSpy app reporting many officers nearby doing traffic enforcement

7) Undue pressure on Clerks, Crown, JJP’s, Justices and the courts in general from above volume and contesting rate and resulting in a well documented trend of bias and errors in transcripts, decisions and other court records.

8 ) Backlogs and delays of up to 24 months to go to trial for simple traffic matters. These and other charter violations created as a result of the predatory enforcement and “safety revenue” schemes. They resulted in Court clerks, Crown and other valuable resources diverted from family court and other important courts. Clerks resigning after pressured into calling accused vehicle owners or drivers to discuss their options and actions they felt were unfair or underhanded.

10) For profit TSS / Xerox / Conduent photo enforcement operators caught in many photos sleeping or distracted while “observing violations”. Operators or Officers making false statements, falsifying notes and other evidence, lying under oath / perjury about signage checked and present, that they were present at the time of the violation and others with little to no consequences. Trend of a lack of or last minute disclosure of officer notes, observation logs, zone and setup diagrams etc … Trend of lying, misleading or bullying of accused by Crown to reduce delays and get plea deals. Trend of Crown and JJP’s denying valid requests for adjournment like last minute disclosure, rights of the self represented ignored and others.

11) Loss of public trust, respect and confidence in police, courts, elected and appointed officials and the system in general which has serious consequences.

12) Anti-public interest legislation / acts, bylaws and policies put in place without due diligence, proper public consultation or debate that allow more breaches of due process, charter and other legal rights instead of dealing with the known and root issues mentioned above. This included but not limited to the option to plead not guilty removed from back of alleged offense notices and form removed from MB JUS website, the right to a fair trial, face your accused and to a proper appeal taken away or made very difficult to know about or stand up for.

Once more of the public get informed of these abuses, misuse of valuable and limited public resources and then take collective and meaningful action things will change.

This doesnt even go into the issue with unfair and unlawful parking enforcement by WPA / CoW and their For Profit partner G4S Tech (now has new name to try and dodge rap from trend of behavior against public interests).

WiseUpWinnipeg
We are Public Advocates for proper safety, engineering, education, legislation plus fair and lawful enforcement (in that order) and related.

To get more informed of the facts and impacts of ignoring, donate and volunteer visit www.wiseupwinnipeg.com, www.facebook.com/groups/WiseUpWinnipeg announcement and regular pinned posts included nested links.

Together we can make a difference.

Like and Follow us on Twitter and Facebook at @WiseUpWpg
info@wiseupwinnipeg.com
Disclaimer: We are volunteer public advocates. If you require legal advice contact a Lawyer registered with LSM, legal aid if you qualify, the public interest law center or recognized law clinic at University.