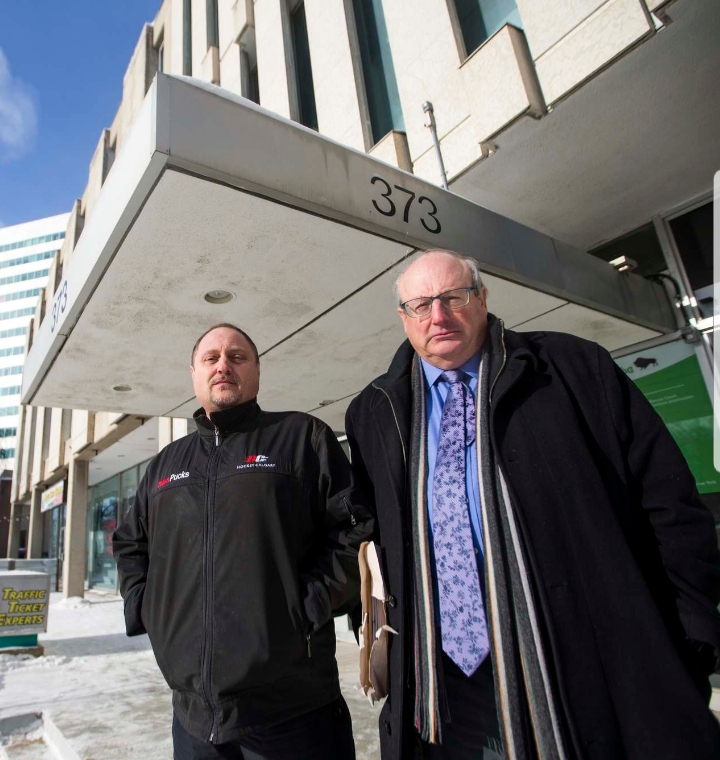 Todd Dube, founder of Wise Up Winnipeg (left) and Keith MacCharles, who is fighting two radar tickets, in front of the traffic courts in Winnipeg on Tuesday

Traffic ticket court bars representative for ‘acting as a lawyer’

However, a driver advocacy organization believes that’s not true — and anyone can be enlisted to help fight a photo radar speeding ticket.

In traffic court Tuesday, Judicial Justice of the Peace Nettie Cuthbert-Buchanan agreed with the Crown’s motion to not allow Christian Sweryda, a second-year law student at the University of Manitoba, to act for a company charged under the Highway Traffic Act for two of its vehicles speeding through photo radar zones.

“I am barring Mr. Sweryda from acting as a representative in this matter,” Cuthbert-Buchanan said.

“He is acting as a lawyer… (the) standards are put in place to protect the public… Mr. Sweryda’s actions are the practice of law.”

Cuthbert-Buchanan said she was using a section in the provincial offences act which states a justice “may bar a person from appearing as a representative if the justice finds that the person is not able to properly represent or advise the person for whom they appear.”

The stance was challenged by Todd Dube, founder of Wise Up Winnipeg.

On the back of a traffic ticket, under the heading Authorization to Appear or Act, it states a person charged with the offence can “act personally or by representative in any proceeding. To authorize another person to appear or act on your behalf, you must provide him/her with your written authorization to present to the court.”

“The legal process abuses, that we’ve seen in traffic court over the years by the Crown and the judicial justice of the peaces, has been alarming,” Dube said after court.

“What we saw here (Tuesday) was the preference of both those parties to keep informed people out of their courtroom. The legal errors we saw (Tuesday) will easily be overturned on appeal,” he said. “Traffic court in Manitoba requires an independent inquiry.”

The traffic ticket court case itself involves two speeding tickets handed out after company vehicles passed photo radar vehicles last year. The matter has been put over until March.

Keith MacCharles, owner of Airmaster Signs, said he is fighting the tickets and wanted Sweryda, a friend of his family, to help him.

“The legal process abuses, that we’ve seen in traffic court over the years by the Crown and the judicial justice of the peaces, has been alarming”

“I’m fighting it because they seem to be more concerned about me getting a ticket than with getting me to slow down,” MacCharles said after court. “They could easily put signs up or traffic calming devices, but they don’t because they want to give out tickets.”

Earlier, the court was told that, for months, Sweryda has appeared for numerous people charged with photo radar violations and has written legal briefs used in the matters.

Crown attorney Amanda Cheys said prosecutors became increasingly concerned, as while the back of the ticket states people charged can get others to help in court, it does not allow people who are not lawyers “free rein as a lawyer without the protections put in place for lawyers.”

Want to get a head start on your day?

Get the day’s breaking stories, weather forecast, and more sent straight to your inbox every morning.

The court was told the province addressed the matter several years ago, when it allowed businesses such as POINTTS and Traffic Ticket Experts to represent people, as long as they registered and bonded.

Cheys said it is the Crown’s view allowing someone to represent a person in traffic court was intended for a relative or friend to come if there were language difficulties or if they needed emotional support.

Sweryda disagreed and said the Crown didn’t have any problems with him representing people until he won a charter motion last year.

“(Since) then, they have fought to have me removed,” he said. “To put it bluntly, it is opponent shopping.”

Sweryda said he represents people he knows, and doesn’t get paid to for his time in traffic court

Kevin Rollason is one of the more versatile reporters at the Winnipeg Free Press. Whether it is covering city hall, the law courts, or general reporting, Rollason can be counted on to not only answer the 5 Ws — Who, What, When, Where and Why — but to do it in an interesting and accessible way for readers.

Comments from a member observing in court.

Fun facts missing from what was said in the court room today: to make more profit, the court allows non-lawyers and students to pretend to be the prosecutors, and allows just about anyone to pretend to be the judge (JJP) in traffic court. There are 3 sides, the govt side, the victim / accused side, and the judge. This non-judge has declared that the victim cannot seek help from a non-lawyer. If the victim does hire a lawyer, he or she would be the only lawyer in the room!. Can the bias here be any more clear?

In real court rooms, the judge has been promoted from being a practicing lawyer, and the prosecution team is made up of lawyers. Not so in what they pretend is “traffic court”.